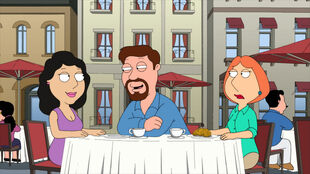 Bonnie, Lois and a mysterious man

Foreign Affairs
When Bonnie and Lois take a little trip to Paris, Bonnie crosses the line. 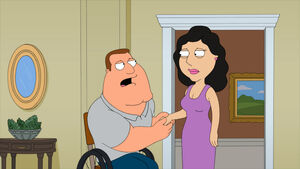 Bonnie and Lois take a little trip to Paris, but Lois becomes shocked when Bonnie announces that she plans on having an affair. Lois tries to distract her with sightseeing and shopping but Bonnie insists on checking out guys. Bonnie explains that she and Joe had been growing apart but Lois' intervenes when Bonnie draws the interest of a man, pulling her away and reminding her of her commitment to Joe and Susie. But when Lois returns from shopping, she finds Bonnie with François, another paraplegic in her room. François asks Bonnie to stay in Paris with him and Bonnie agrees, telling Lois she's considering the offer. When Bonnie tells Lois she decided to stay, Lois reveals she called Joe to try to talk some sense into her. Joe apologizes for neglecting her and makes his case for Bonnie to return home. François begs Bonnie to stay with him. Bonnie is hesitant until Joe proves his love for her by standing and walking. Bonnie agrees to stay with Joe but as they leave, Quagmire is revealed to be strapped to Joe's back and legs to help him walk. 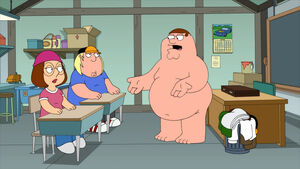 Meanwhile, after seeing a report of an outbreak of goat flu on the news, Peter decides to home school Chris and Meg. However, Peter's teaching methods prove to be unorthodox when he strips and rides a scooter around the garage classroom while encouraging Chris and Meg to do the same. Chris joins in and is given an "A" while Meg resists and is given an "F". Peter's history lesson leaves some things to be desired and he is surprised when he hires outside math and driver's ed teachers only to find the math teacher is black while the driver's ed teacher is Asian. After a field trip to the desert to smoke peyote, Peter gives a final exam and discovers Chris knows absolutely nothing and agrees to send the kids back to school. Back in school, Chris' teacher rides naked around the classroom on a scooter. Thinking back to his dad, Chris answers a question correctly as the teach crashes on his scooter and yells for a nurse.

Retrieved from "https://familyguy.fandom.com/wiki/Foreign_Affairs?oldid=198482"
Community content is available under CC-BY-SA unless otherwise noted.