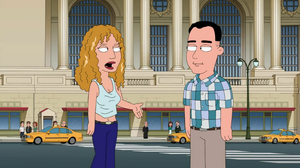 Forrest Gump is a fictional character who first appears in the 1986 eponymous novel by Winston Groom and in the 1994 film of the same name directed by Robert Zemeckis. Gump was portrayed as a child by Michael Humphreys and portrayed as an adult by Tom Hanks, who won an Academy Award for the role.

Stewie says "Life is like a box of chocolates" in "Death Has a Shadow", the famous line from Forrest Gump.

The doctor shows Peter where his test results place him in terms of intelligence in "Petarded". His chart shows “Retarded” below “Average”, but above “Creationist”. The scene is a reference to a similar scene in Forrest Gump.

In "Yug Ylimaf" the lines Peter and Lois say after exiting the hospital following Stewie's birth parody the scene in Forrest Gump in which Forrest asks Jenny Curran, "Is he smart, or is he like me?", after finding out that Jenny's son is also his own.

In "Quagmire's Quagmire", Peter notes that love does funny things to people when Quagmire gets in over his head with a sexually insatiable Sonja but Peter is oblivious to his attempts to get help. A cutaway to Forrest Gump shows Jenny putting off their relationship to have sex or drugs with various other people. When she comes down with AIDS, she finally decides to settle down with Gump and he has remained faithful to her, taking care of her AIDS-afflicted baby and mowing the lawn. In this gag, Forrest Gump is voiced by Danny Smith.

After shrinking himself and Brian in "Big Trouble in Little Quahog", Stewie impersonates Forrest Gump when comparing walking though the shag carpeting to the jungles of Vietnam.

Peter and Quagmire debate which was better, Forrest Gump or Pulp Fiction in "Peter & Lois' Wedding". Quagmire has a major issue with Gump becoming a millionaire while his girlfriend dies of AIDS. Peter admits he never saw either film, but saw Ace Ventura fifty times.

Brian incorporates Forest Gump into his family remembrance of Meg in "Better Off Meg".

Joe mentions that he often forgets films right after watching them, except for Forrest Gump in "Boy's Best Friend".