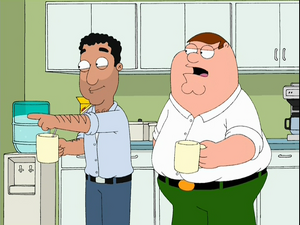 Fouad is one of Peter Griffin's co-workers at the Pawtucket Brewery. He is a recent immigrant to the United States, apparently of Arab ethnicity. In all his appearances he has demonstrated that he is extremely earnest in his attempts to learn a Western sense of humor and understand its subtleties, such as the nature of a sarcastic or ironic comment. He laughs in a loud manner at sarcastic or ironic statements before explaining why the joke was funny. Peter does not seem to have a strong relationship with Fouad, likely due to his comparatively short time employed at the Pawtucket Brewery, however Peter gets along much better with Fouad than he does with Opie or Angela.

Fouad first appears in "Chick Cancer", being introduced by Peter as that foreign guy at work who helped him understand sarcasm. He later appears as one of the spectators that were invited by Peter to view the premier of his film "Steel Vaginas".

In Blue Harvest, Fouad plays Lieutenant Shann Childsen on the Death Star prison deck, who laughs when Chewbacca (played by Brian) asks for a cell by the pool, stating that it is funny because prisons do not have luxury areas such as swimming pools.

In "Padre de Familia", Peter suspects that Fouad may be an illegal immigrant, and is angered because of it.

Fouad's voice is also heard off-camera in a DVD exclusive scene in "Three Kings". In the The Shawshank Redemption segment, Captain Hadley, played by Seamus, yells for lights out, calling the inmates "ladies" and Fouad replies that it is funny because they are men.

He appears as one of several sidelined characters in the opening of "A Lot Going On Upstairs" And makes a brief appearance in "Follow the Money".

He is present when Angela dismisses the employees of the brewery early in "Don't Be a Dickens At Christmas" and swaps bodies with Eddie the Live Studio Ostrich in "Switch the Flip".

Fouad is voiced by Mike Henry.

Retrieved from "https://familyguy.fandom.com/wiki/Fouad?oldid=222590"
Community content is available under CC-BY-SA unless otherwise noted.