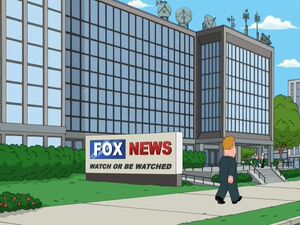 Fox News Channel is an American cable news and satellite channel owned by the Fox Entertainment Group, a subsidiary of the Fox Corporation, formerly 21st Century Fox, formerly News Corporation. As of April 2009, it is available to 102 million households in the U.S. and further to viewers internationally, broadcasting primarily out of its New York City studios.

Bill O'Reilly appears during the song "I've Got a Little List", a DVD-exclusive from "Lois Kills Stewie".

In "Ocean's Three and a Half" Droopy Dog fills in for Alan Colmes on Hannity & Colmes, parodying Colmes passive nature to Sean Hannity's fiery conservatism.

Fox News is featured prominently in "FOX-y Lady". Lois Griffin takes a job at the studio as a reporter after news anchor Rhonda Latimer is fired despite Brian's warnings that Fox News is a biased network. She went up against people like Al Harrington, Seamus, and Consuela. During her introduction around the studio, she finds out that Ann Coulter Coulter is shown being cold in more ways than one. Her first assignment is to out Michael Moore, but she discovers that Moore is apparently gay with Rush Limbaugh. Lois soon realizes that Brian was right about Fox News and decides to do the report anyway to embarrass Limbaugh, but Lois and Brian discover that Limbaugh and Moore are actually Fred Savage, who is established as the greatest actor in the history of the world. At the end of the episode, Lois is back at home with the family and doesn't bother to explain how she lost her job since the story's over.

In the DVD and Adult Swim/TBS versions of "Quagmire's Dad", Peter Griffin helps Chris with his French lessons including the word "phoque" for seal. As they run through a series of word combinations, Peter holds up a photo of Ann Coulter to form "Ugly phoquein' bitch."

After remaking himself as a blue collar worker in "American Gigg-olo", Brian takes up watching Fox News.

Retrieved from "https://familyguy.fandom.com/wiki/Fox_News_Channel?oldid=218450"
Community content is available under CC-BY-SA unless otherwise noted.