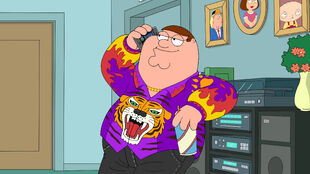 Foxx in the Men House
Peter dumps his old friends for a new one. 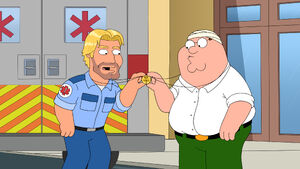 While taking the family out to a hibachi restaurant, Peter accidentally discovers how peaceful things are in the women's room and decides to continue to use them in other locations. But when he knocks himself senseless during one of his outings after spending so much time on a toilet while watching House of Cards that his legs fall asleep, he meets a paramedic named Stryker Foxx and the two hit it off. Peter soon allows his new cool friendship come between his old friends and when they catch him after he ditches them, they leave him. When Stryker takes him out to fly with a wingsuit, he watches as Stryker smashes himself to paste trying a stunt. 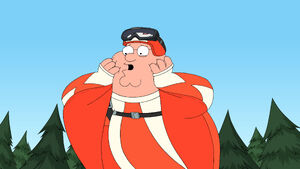 He tries to reunite with the guys and they refuse to have anything to do with him. When he discusses the problem with Lois, his takeaway from her advice is to jump off the cliff in his wingsuit to prove his friendship. Word gets back to the guys of his intended stunt and they stop him, letting him know that if their friendship means that much to him, they'll forgive him. Just as they they start to leave, Peter's attempt to "fist bump" results in him falling off of the cliff. He successfully completes the stunt that killed Stryker before crashing into a tree and falling to the ground to be hit by a sack of falling nickels.

At the Drunken Clam, Peter apologizes for his behavior until the guys reveal that it was all just a coma-induced fantasy following his bathroom fall and the events never happened. To celebrate their friendship, they go out dancing and doing ecstasy at a Mexican prom.

Previous Episode /// Foxx in the Men House \\\ Next Episode

Retrieved from "https://familyguy.fandom.com/wiki/Foxx_in_the_Men_House?oldid=199511"
Community content is available under CC-BY-SA unless otherwise noted.