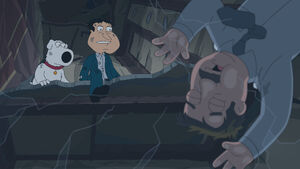 Frank was the driver of Quagmire's campaign bus in "Adam West High".

When Brian confronts Quagmire on his bus after being sabotaged in the mayoral debate where the two were competing to become the new Mayor of Quahog, Rhode Island, Quagmire's insults result in Brian knocking the driver cold when he heaves a glass of whisky at him, causing them to crash with the bus hanging on the side of a cliff.

As they wonder if the driver is still alive, Quagmire is unable to guess his name but is convinced it was a 'Spanish-y' starting with 'G', guessing 'Gugardo.' When he tosses a small screw near his head to get his attention, it shatters the glass, sending the driver plummeting to his death and revealing his name of 'Frank' on his jacket.

Retrieved from "https://familyguy.fandom.com/wiki/Frank_(Adam_West_High)?oldid=213417"
Community content is available under CC-BY-SA unless otherwise noted.