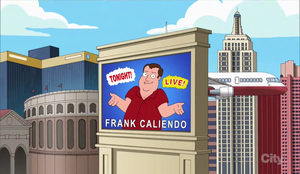 Frank Caliendo (born January 19, 1974) is an American comedian, impressionist nd actor, known for his work on MADtv, Fox NFL Sunday and Frank TV. From 2009 to 2011 he had a show at the Monte Carlo Resort and Casino on the Las Vegas Strip.

As Quagmire is attempting to dodge missiles above the Las Vegas strip in a passenger jet following an attempted hijacking in "Passenger Fatty-Seven", Peter notes that Frank Caliendo as a show playing and demands Quagmire land the plane.

Retrieved from "https://familyguy.fandom.com/wiki/Frank_Caliendo?oldid=191914"
Community content is available under CC-BY-SA unless otherwise noted.