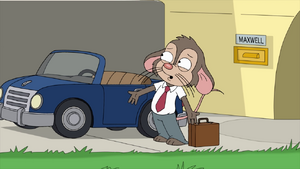 Frank Maxwell is a mouse that had a hole in the front of the Griffin home in "Nanny Goats".

New nanny Natalia reveals to Stewie that she is an assassin intent on killing "liberal dissident" Fievel Mousekewitz, but Stewie informs her that the only mouse around is Frank. Frank appears and assures her that he isn't who she is looking for, but when he starts his tiny mouse car to go to work, it explodes. Natalia denies having anything to do with the explosion, but it is shown that Mickey Mouse caused it due to Frank being Jewish.

Retrieved from "https://familyguy.fandom.com/wiki/Frank_Maxwell?oldid=199312"
Community content is available under CC-BY-SA unless otherwise noted.