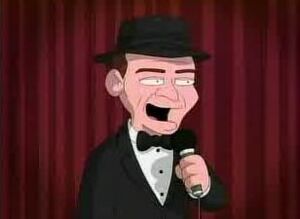 He appears with Dean Martin and Sammy Davis, Jr. in "Jerome Is the New Black" singing racist songs that were perfectly acceptable through the 1950s-1960s on the album. On the album, Sinatra contributes his songs "Jewish Nose", "Pew, Stinky Frenchman", and "Drunk Old Injun", and sang "Hey There, Fruity" with Martin and Davis.

His existence is averted in the Apocalyptic Universe of "Road to the Multiverse".

Sinatra appears with Sammy Davis, Jr. in "Into Fat Air" when they pop out of an open window in front of Brian and Stewie on the side of Mt. Everest. Sinatra demands that Davis get back to carrying his golf clubs leaving Stewie to wonder if that is racist.

"Luck Be a Lady" by Frank Sinatra plays while Lucky Stewie and Brian go around Las Vegas in "Roads to Vegas".

Frank is seen in a Dean Martin roast infomercial in "Roasted Guy".

In "Petey IV", Peter sets up a cutaway gag that insinuates that Ronan Farrow is actually Frank Sinatra's son instead of Woody Allen's.

Retrieved from "https://familyguy.fandom.com/wiki/Frank_Sinatra?oldid=223631"
Community content is available under CC-BY-SA unless otherwise noted.