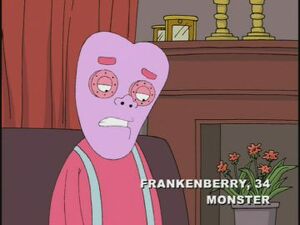 Frankenberry is a fictional character that appears as one of the General Mills monster-themed breakfast cereal mascots. The series also includes the currently produced Count Chocula, and Boo Berry, and the limited production Fruit Brute and Fruity Yummy Mummy.

In "A Fish out of Water", Peter and Brian lock rings and both say "Wonder Twin Powers...activate!". When nothing happens, Brian reminds Peter that they got the rings in a box of Frankenberry cereal.

He appears as a contestant on The Bachelorette in "Brian the Bachelor". As the brand has existed since 1971, the show correctly identified him as 34 years old at the time of the episode's production and initial airing.

Cleveland Brown dresses as Count Chocula in "Dog Bites Bear" to trick Peter into washing his hand, but says he would have preferred to dress as Frankenberry.

Retrieved from "https://familyguy.fandom.com/wiki/Frankenberry?oldid=226370"
Community content is available under CC-BY-SA unless otherwise noted.