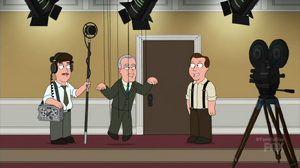 Franklin Delano Roosevelt (January 30, 1882 – April 12, 1945), commonly known by his initials FDR, was an American statesman and political leader who served as the 32nd President of the United States, notable for winning four terms to the office and leading the United States out of the Great Depression and through WWII. Franklin was diagnosed with polio in 1921 and spent much of his latter life in a wheelchair. Despite his condition being accepted and commonly known, FDR and his staff went to lengths to hide any appearance of weakness.

While trying to hide the fact that he isn't rich like Chadley in "Take a Letter", Stewie feels he is living a lie, like FDR. A cutaway shows Roosevelt being maneuvered with strings like a puppet, in an attempt to hide his disability caused by Polio. When he is finished, he requests to be kicked into the closet but teases the assistant about being a Yale man after it takes multiple kicks to get him inside of the closet.

When Peter and the guys rob a bank in "Peter's Def Jam" dressed as former US Presidents, the bank teller observes that Joe should have selected FDR instead of William Henry Harrison.

Peter tells Donald Trump that he'll never be a great president compared to the likes of FDR or Abraham Lincoln in "Trump Guy".

Retrieved from "https://familyguy.fandom.com/wiki/Franklin_Delano_Roosevelt?oldid=224094"
Community content is available under CC-BY-SA unless otherwise noted.