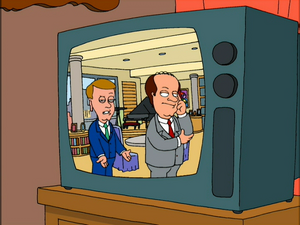 In "Peter, Peter, Caviar Eater", Brian Griffin forces his owner, Peter, to watch an episode of Frasier in an attempt to teach him how to act with class.

Dr. Crane also appears when Peter watches Cheers in "Road to Rupert", with Peter trying to join in as a character.

Niles and Frasier appear when Peter doubts Meg's claim of modeling in "This Little Piggy", claiming that her only chance of fame would have been as the dog on Frasier.

Retrieved from "https://familyguy.fandom.com/wiki/Frasier_Crane?oldid=198867"
Community content is available under CC-BY-SA unless otherwise noted.