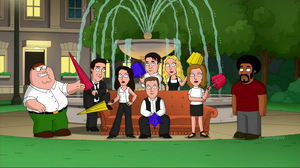 Friends is an American sitcom created by David Crane and Marta Kauffman, which originally aired for ten seasons on NBC from September 22, 1994 to May 6, 2004. It revolves around a circle of twenty-something friends living in New York City.

In "Petergeist", Stewie talks to the TV, about an episode of Friends, where Ross and Rachel get back together. He also mentions the spin-off series, Joey.

In "Three Kings", during the parody on The Shawshank Redemption, Warden Samuel Norton, played by Carter Pewterschmidt, watches Friends.

In "April in Quahog", Peter thought that Chandler was one of Chris' friends.

When explaining to Jerome why he should "Thank the Whites" in "Baby Got Black", Peter uses the cast of Friends as an example.

Peter's eulogy for Angela in "Pawtucket Pete" contains part of the theme song to Friends.

Stewie comments that he is "back on the market" and acknowledges he got the line from Friends in "The Talented Mr. Stewie".

Retrieved from "https://familyguy.fandom.com/wiki/Friends?oldid=226787"
Community content is available under CC-BY-SA unless otherwise noted.