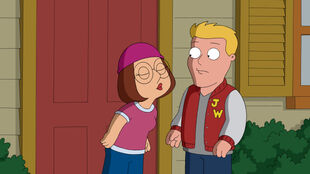 Friends Without Benefits
Meg is saddened when she learns a boy she has a crush on is gay. 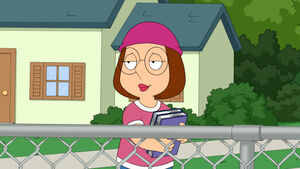 When Meg gets lovesick over new boy Kent, she is afraid to approach him due to his popularity. But after a close call when she is almost struck by Mayor West, she decides to go ahead and ask Kent out. To her surprise he accepts. When Kent arrives to take Meg out, he makes small talk with Chris. After a night at the movies, she tries to kiss Kent and reveals that he is gay and prefers Chris although Stewie overhears and believes he is the subject of Kent's attraction. As Meg cries the next morning, she opens up to Brian after he gets trapped with her and he tells her that perhaps Kent is confused, leaving Meg determined to set Kent straight. 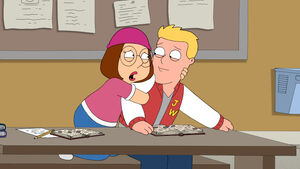 The next day at lunch, Kent seeks out Chris but Meg interrupts and tries to convince him he is confused. Brian goes to Stewie to tell him and he is still convinced that Kent is in love with him. Meg's friends try to perk her up but when they suggest that Kent really does love Chris she gets the idea to have Kent sleep with Chris so he can tell her what it was like so she could at least have some closure. When she proposes her idea to Chris he is appalled and even rejects an offer of one hundred dollars. Determined, Meg goes to Quagmire to get roofies to dope Chris. She then tells Kent the date with Chris is on but that he will be asleep. Planting the drugs in Kool-Aid, she calls Chris and finds him in her room where he planted a photo of them as kids on a family trip to help her remember the good times. Feeling bad about her plan, Meg pours out the Kool-Aid into a plant which is then molested by another plant after it passes out. When Kent crawls into Chris' bedroom, he finds that Chris isn't up for sex. Chris calls Meg for an explanation and she is forced to reveal her plan. As Kent stomps out, Stewie finds some of the roofies and passes out with Meg's plant approaching him. The next day, Brian comforts Meg by telling her that she just has to wait for some guy to make a mistake as Stewie complains of possibly getting poison ivy in his butt.