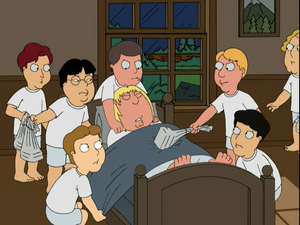 Full Metal Jacket is a 1987 war film by Stanley Kubrick, based on the novel The Short-Timers by Gustav Hasford. The title refers to the full metal jacket bullet type of ammunition used by infantry riflemen. The film follows a squad of U.S. Marines through their United States Marine Corps Recruit Training and the experiences of two of them in the Tet Offensive (1968) during the Vietnam War.

In "A Hero Sits Next Door", all Peter Griffin can think to offer the Japanese baseball player, a potential replacement for the injured Guillermo, is "Me love you long time", a line a prostitute delivers in the film.

At the carnival shooting gallery in "A Picture's Worth a Thousand Bucks", Stewie sings “This is my rifle, this is my gun. This is for fighting, this is for fun”. That is a modern military slogan made famous by the film.

The film was parodied in "No Chris Left Behind" when Chris Griffin is beaten with money stuffed into socks by the rich kids.

"Saving Private Brian" has numerous references to the film.

In "Long John Peter", when Peter's parrot is injured from the battle, it says "Shoot me" as the Viet Cong Sniper did in the film did before his death.

Joe yells "This is my wheelchair..." while cleaning his wheelchair in "Baby Not On Board" in a parody to the film.

In "Grumpy Old Man" a drill sergeant with Alzheimer disease is cursing repeatedly at a private he calls a "joker", one of the main characters in the actual film. R. Lee Ermey also voiced the drill sergeant in the episode.

Retrieved from "https://familyguy.fandom.com/wiki/Full_Metal_Jacket?oldid=218777"
Community content is available under CC-BY-SA unless otherwise noted.