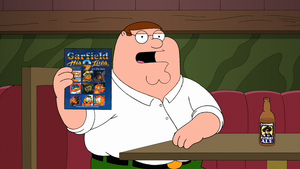 Garfield is a comic strip created by Jim Davis. Published since June 19, 1978, it chronicles the life of the title character, the cat Garfield; his owner, Jon Arbuckle; and Arbuckle's dog, Odie.

In "North by North Quahog", Stewie reads Peter's copy of Garfield At Large, Garfield's first book and comments on Nermal.

In the extended DVD cut of "Amish Guy", Peter retorts with a quote from Garfield about not being overweight but under tall. He then goes on an extended rant against Jim Davis and the Garfield book, Garfield: His 9 Lives in which he proclaims that half of the stories are not funny and some of which are deeply disturbing such as "Primal Self", in which it is suggested that he kills his elderly owner. Peter offers to give Jim a pass because of the normal laughs given by the strip but notes that Garfield: His 9 Lives frightened him so bad that he needed to sleep with his mother, Thelma Griffin for a week.

Peter is hesitant to let down a drawbridge to the house in "A Fistful of Meg" until Lois reveals she picked up a copy of Garfield: A Tale of Two Kitties at the video store.

Peter realizes he is deaf in "Peter's Def Jam" when he can no longer hear a Garfield cartoon on television.

Retrieved from "https://familyguy.fandom.com/wiki/Garfield?oldid=198470"
Community content is available under CC-BY-SA unless otherwise noted.