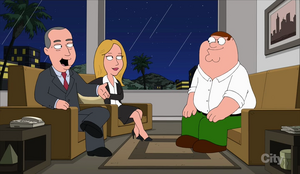 Gary provides his own voice in "Inside Family Guy" when the network decides they must fire Peter Griffin. He previously had a voice credit in "It Takes a Village Idiot, and I Married One".

He also provides his own voice in "Disney's The Reboot", when the network executives discover that the orders to revamp Family Guy came from a squirrel that snuck into the building.

Retrieved from "https://familyguy.fandom.com/wiki/Gary_Newman?oldid=215690"
Community content is available under CC-BY-SA unless otherwise noted.