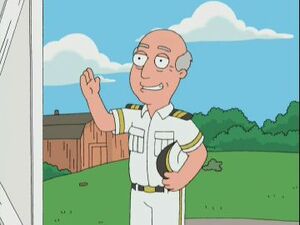 He founds "The Church of Captain Stubings" in "The Father, the Son, and the Holy Fonz", converting some members of the Church of the Fonz, led by Peter Griffin.

After taking The Love Boat passengers and crew hostage, Somali pirates kill Captain Stubing after he points out some of the responsibilities he has such as convincing Mr. Devlin that he still loves his wife in "Brian's a Bad Father". The pirates then tell Mr. Devlin to go skinny-dipping with his wife like they did when they were kids.

Retrieved from "https://familyguy.fandom.com/wiki/Gavin_MacLeod?oldid=198225"
Community content is available under CC-BY-SA unless otherwise noted.