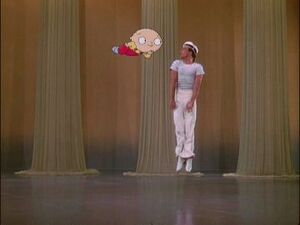 Eugene Curran "Gene" Kelly (August 23, 1912 – February 2, 1996) was an American dancer, actor, singer, film director and producer, and choreographer. Kelly was known for his energetic and athletic dancing style, his good looks and the likeable characters that he played on screen.

Although he is known today for his performance in Singin' in the Rain, he was a dominant force in Hollywood musical films from the mid 1940s until this art form fell out of fashion in the late 1950s. His many innovations transformed the Hollywood musical film, and he is credited with almost single-handedly making the ballet form commercially acceptable to film audiences.

In "Road to Rupert", Stewie Griffin joins Kelly in a performance of "The Worry Song" in Anchors Aweigh in place of Jerry Mouse of Tom and Jerry.

Retrieved from "https://familyguy.fandom.com/wiki/Gene_Kelly?oldid=198244"
Community content is available under CC-BY-SA unless otherwise noted.