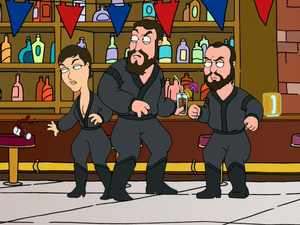 General Zod is an evil Kryptonian and the main antagonist of Superman II. On Earth, he has all the abilities that Superman possesses, such as super strength and the ability to fly.

In "Lethal Weapons", Zod and his gang, Ursa and Non, were seen in The Drunken Clam when Peter was getting Lois to fight off all the New Yorkers that were taking over Quahog. Often Peter started a fight by saying that their favorite sports teams sucked, and when he said "Krypton sucks", Zod and his gang attacked Peter. Lois threw all three of them into the Phantom Zone, and they drifted off into space like the first Superman movie.

In a battle at the Fortress of Solitude in "The Cleveland-Loretta Quagmire", Superman pulls the "S" off of his chest and throws it at General Zod in a highly ineffective attack.

Zod lives in Quagmire's new apartment building when he moves out of the neighborhood in "Hot Pocket-Dial" and complains that he is blocking Zod's "Trapezoid-shaped thing."

Retrieved from "https://familyguy.fandom.com/wiki/General_Zod?oldid=225543"
Community content is available under CC-BY-SA unless otherwise noted.