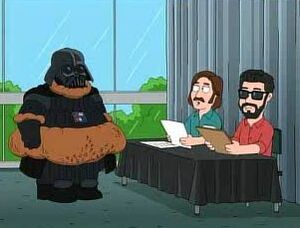 George Walton Lucas, Jr. (born May 14, 1944) is an Academy Award-nominated American film producer, screenwriter, director and founder/chairman of Lucasfilm Ltd. He is best known for being the creator of the epic science-fiction franchise, Star Wars, and joint creator of the archaeologist-adventurer character, Indiana Jones. Today, Lucas is one of the American film industry's most financially successful independent directors/producers, with an estimated net worth of $3.0 billion as of 2009.

Star Wars and Indiana Jones have been referenced and parodied many times over the course of the series.

Lucas is shown holding auditions for the role of Darth Vader in "Go, Stewie, Go!". When James Earl Jones tries out for the role, his large size prompts the casting director to note they would use his voice but not in the costume.