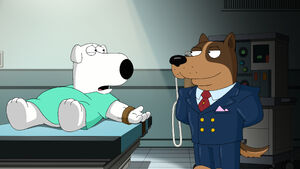 George Townsend, aka Shredder, was an old acquaintance of Brian's who reconnects with him in "Short Cuts".

Brian finds that his old friend is doing quite well as a tech entrepreneur and author, and is convinced that the only thing holding him back from achieving the same is not being neutered. When he decides to go through with it, despite Stewie's reservations, the latter discovers a secret in one of George's books and rushes to stop the procedure. Brian finds he has been set up by his old 'friend' who harbors a resentment for being dumped in favor of Peter, and applies the anesthetic to Brian so the procedure can begin. Stewie arrives and stops things at the mid-point, costing Brian only one of his testicles. They convince George that his revenge was at least partially satisfied and because of Brian, he achieved all of his wealth in the meantime, with Brian's missing testicle being replaced by a jester's bell after George ate it.

George is voiced by Christopher Meloni.

Retrieved from "https://familyguy.fandom.com/wiki/George_Townsend?oldid=219274"
Community content is available under CC-BY-SA unless otherwise noted.