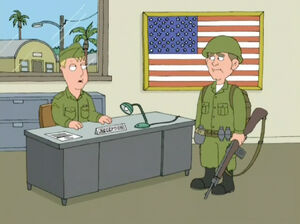 He mostly appears in flashbacks and cutaways, often doing stupid things. He is voiced by Kirker Butler.

Bush made his earliest appearances in the third season of the show, as in person in "Mr. Griffin Goes to Washington", who Peter tries to get support from for the forthcoming anti-smoking rallies and in a poster during "You've Got a Lot to See" in "Brian Wallows and Peter's Swallows".

Peter is invited to the White House to entertain Bush in "Don't Make Me Over", which he does by donning a clown's red nose, and making a series of silly faces and noises, as if entertaining a young child. Bush is delighted until he accidentally knocks his snow globe off the desk, when he throws a petulant tantrum and crying. At the end of the episode on the set of Saturday Night Live, Gene Simmons sticks his tongue in Bush's ear.

He was seen hiding in a treehouse after Hurricane Katrina in "The Fat Guy Strangler". When Brian Griffin asked him to help out, he told him to go away because he's reading Judy Blume's Superfudge.

He appears in "Boys Do Cry" when the Griffins move to Texas. Meg and Chris are dared by new classmates to steal his underwear, and thus they have trespassed onto Crawford Ranch, which is guarded by Dick Cheney. Inside the Crawford Ranch there are pictures of Bush with Ronald Reagan, Saddam Hussein, Osama bin Laden, and the Super Devil. Chris spots Bush's "sugar" (cocaine), and razor blade. Bush encourages the kids to grab a beer before climbing into the car he's been restoring, a reference to his DUI. After he befriends the kids, he lets Chris take and share the underwear.

In "PTV", he shows up at a U.S. army base in Vietnam, hoping to fight in the war, but a commander tells him the war has been over for a while, much to his disappointment. He then asks the commander if he wants to do something else, the commander says he's got some cocaine, and Bush tells him to get it out.

After democracy suddenly breaks out in Iraq during the episode "Saving Private Brian", Stewie remarks that only one person had the foresight to envisage this. The scene cuts to Bush at the top of the stairs, awestruck that he got his slinky to slide all the way down the stairs, calling for his wife in excitement.

In "Lois Kills Stewie", during an extended gun battle between Lois and Stewie in the White House, Lois deliberately shoots an excess amount of bullets at the portrait of Bush.

A Bush/Cheney 2004 bumper sticker is seen on the back of the star destroyer at the beginning of Blue Harvest.

In "I Dream of Jesus", Bush claims at a press conference that Jesus Christ incited him to go to war. An angry Jesus, brought to see Bush by Peter, refutes everything Bush has said. A younger Bush is seen during the song "Me and Jesus" in the same episode, in a military aircraft dropping bombs.

A photograph of Bush shaking had with the FOX News executive appears in his office in "FOX-y Lady".

In "Excellence in Broadcasting", he is shown to act like a child when he sees Rush Limbaugh. The extended DVD cut of the episode shows his father, 41st President George H. W. Bush complaining about needing to change his Spider-Man sheets after Limbaugh gives him candy.

After Brian tips off his past self about 9/11 in "Back to the Pilot", George Bush loses the 2004 election and starts the second Confederate State of America, resulting in a nuclear war with the United States. Brian and Stewie would later undo the changes to the past they caused by intercepting themselves and forcing them to return to the present.

When Chris is elected as homecoming king out of pity, Brian takes a very late slam at George in "Run, Chris, Run", much to Stewie's exasperation.

Retrieved from "https://familyguy.fandom.com/wiki/George_W._Bush?oldid=198245"
Community content is available under CC-BY-SA unless otherwise noted.