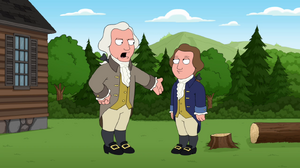 George Washington (February 22, 1732 – December 14, 1799) was the dominant military and political leader of the new United States of America from 1775 to 1797, leading the American victory over Britain in the American Revolutionary War as commander in chief of the Continental Army, 1775–1783, and presiding over the writing of the Constitution in 1787. As the unanimous choice to serve as the first President of the United States (1789–1797), he developed the forms and rituals of government that have been used ever since, such as using a cabinet system and delivering an inaugural address. The president built a strong, well-financed national government that avoided war, suppressed rebellion and won acceptance among Americans of all types.

Washington's head carving is seen on Mount Rushmore in "North by North Quahog". For the episode, the heads of Mt. Rushmore can talk.

When Peter tries to talk Chip out of a day of adventure because it would be tiring for him in "Vestigial Peter", he insists he is just being honest like George Washington. A cutaway shows young George owning up to chopping down a cherry tree, but effeminately disavows any knowledge of a pamphlet on the Boston "He" Party his father finds under his bed. George is voiced by Seth Green in this appearance.

In "Stewie, Chris & Brian's Excellent Adventure", he is observed crossing the Delaware with water wings due to being terrified of the water.

During the song "Patriotic Weirdness" in "Peter's Sister", Jack Skellington and the citizens of Halloween Ton take over the 4th of July, celebrating with the skeletons of George Washington, Abraham Lincoln and Franklin Delano Roosevelt.

When Donald Trump tries to defend his sexual proclivities in "Trump Guy", he notes that every other President has done the same, leading to a portrait of George planning sex with Martha Washington.

Retrieved from "https://familyguy.fandom.com/wiki/George_Washington?oldid=209737"
Community content is available under CC-BY-SA unless otherwise noted.