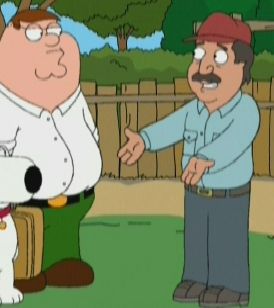 Gerardo is a Mexican immigrant who works as Carter and Barbara Pewterschmidt's head groundskeeper. He became friends with Peter Griffin in "Padre de Familia". After being told to get back to work during their Cinco de Mayo celebration, Peter complained to Carter Pewterschmidt that he wanted him to make everyone there an official American citizen. But Gerardo told Peter that he must go and they will find their own way. Peter said he was never going to forget Gerardo, but in the end of the episode he actually ended up calling him Ronaldo, indicating he had already forgotten him.

Geraldo is voiced by Alex Fernandez.

Retrieved from "https://familyguy.fandom.com/wiki/Gerardo?oldid=198238"
Community content is available under CC-BY-SA unless otherwise noted.