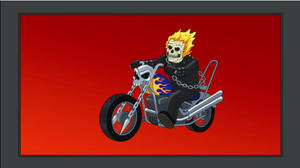 Ghost Rider is the name of multiple antihero and Superheroes appearing in Marvel Comics, the most notable of which is stunt motorcyclist Johnny Blaze, who, in order to save the life of his father, agreed to give his soul to "Satan" by becoming a flaming skeleton to hunt down evil.

'Ghost Rider' is announced as appearing at the 28th Annual Quahog Monster Truck Rally and Gunshow in "Bri-Da".

Retrieved from "https://familyguy.fandom.com/wiki/Ghost_Rider?oldid=215329"
Community content is available under CC-BY-SA unless otherwise noted.