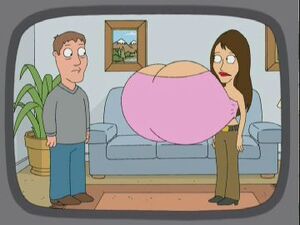 Ghost Whisperer was an American television series created by John Gray. It first premiered on CBS on September 23, 2005 and ended in May 2010.

The series follows the life of Melinda Gordon (Jennifer Love Hewitt), a young woman from Grandview, New York, who has the ability to see and communicate with the dead. While trying to live as normal a life as possible, Melinda helps them pass over to the other side by working as a paranormal investigator, sometimes dealing with people who disbelieve her ability.

The Griffins watch Ghost Whisperer in "Hell Comes to Quahog" where Jennifer Love Hewitt, who is featured with enormous breasts, can't understand why all of the ghosts keep coming to see her.

Retrieved from "https://familyguy.fandom.com/wiki/Ghost_Whisperer?oldid=198208"
Community content is available under CC-BY-SA unless otherwise noted.