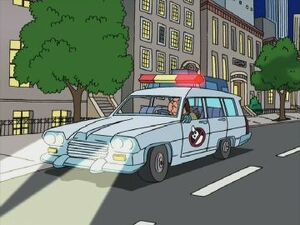 Ghostbusters is a 1984 science-fiction comedy film written by co-stars Dan Aykroyd and Harold Ramis about three eccentric New York City parapsychologists-turned-ghost exterminators. The film was released in the United States on June 8, 1984 and like several films of the era, teamed Aykroyd and/or Ramis with headliner Bill Murray. It was produced and directed by Ivan Reitman, who also directed Stripes, and stars Murray, Aykroyd, Ramis, Rick Moranis, Sigourney Weaver, Annie Potts, and Ernie Hudson.

The film was remade in 2016 with the lead roles filled with actresses. Unless a distinction is added to a listing, the references are directed toward the original film.

In "The Story on Page One", Peter Griffin is a Ghostbuster and interrupts the famous potter wheel scene in the movie Ghost and sucks up Patrick Swayze's character.

After the Griffins’ house disappears in "Petergeist" thanks to Native American spirits, Tom Tucker asks who they will call. His co-anchor Diane Simmons replies with the Ghostbusters. Tom replies that they would call their insurance company, calling her response stupid.

In "Road to Rupert", Lois opens the refrigerator and tells Peter to get out, he replies that he is not Peter, he is Zuul.

The DVD commentary for "Yug Ylimaf" indicates that the burst of light through the Griffin's roof is inspired by a combination of Ghostbusters and Raiders of the Lost Ark.

Peter thinks the Ecto-1 car is at the hospital in "Vestigial Peter".

To put Brian's death behind them in "Life of Brian", Peter suggests getting Ghostbuster jumpsuits with their names on them.

During the song "Come On Home" in "Candy Quahog Marshmallow!", a large marshmallow figure is intended to evoke the Stay Puft Marshmallow Man from Ghostbusters.

Peter notes that he and the guys are like the male version of the female Ghostbusters when trying to search for ghosts in the basement in "Hefty Shades of Gray".

When Peter challenges Joe to a late-night duel in "Cat Fight", he at first packs a flamethrower and then a proton pack from Ghostbusters. He manages to capture Mayor Adam West and decides to hold of until they get around to getting a new mayor.

When Lois' Facebook picture is replaced by a prohibition circle with veterans in it by Connie D'Amico in "Connie's Celica", Peter says he prefers that for his ghosts, alluding to the logo for Ghostbusters.

Retrieved from "https://familyguy.fandom.com/wiki/Ghostbusters?oldid=217960"
Community content is available under CC-BY-SA unless otherwise noted.