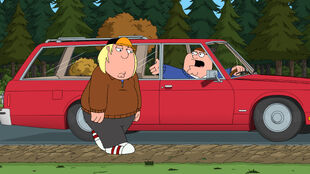 Girlfriend, Eh?
Peter and Chris take a road trip to Canada to prove the existence of Chris' girlfriend. 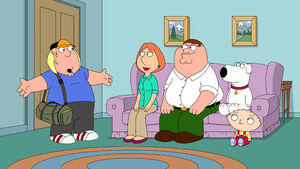 Chris returns from camp with news of meeting a girl, but when he gives romantic advice to Peter, he annoys him. When he mentions this to the guys, they suggest that perhaps Chris is making things up. When Chris annoys him again, Peter calls his bluff. When Chris hesitates, he insists they make a road trip to Canada to meet this girl. Stopping at a Canadian strip club, Peter flatly admits that he doesn't believe that Chris is good enough to get a girlfriend, which upsets the latter and abandons Peter. Peter eventually gets him back into the car and apologizes, admitting that he made up a Canadian girlfriend himself when he was a teenager. When they arrive at the address that Chris provided, Chris thanks him and briefly gets out of the car as his girlfriend actually appears in the window and steps out of the house. However, Peter is still hanging his head in shame, and Chris realizes that seeing her would only make him feel worse, so he waves her off without Peter knowing and then claims that he lied as well. As they drive away together, Chris texts his girlfriend and explains the situation, asking her to send nudes. She responds that that she understands because her dad is Nickelback and she's ashamed of him as well. 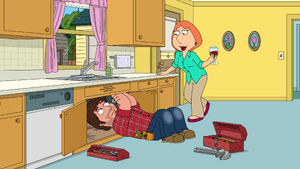 Meanwhile, in an effort to get buff and impress Doug, Stewie tries to work out but ends up getting knocked through the wall. Lois insists that they call a handyman to repair it, and the remaining family is surprised when he turns out to be extremely buff. They continue to come up with jobs to keep him around, but Lois takes offense when Meg starts to compete for his attentions as well and they proceed to try to one-up each other to get his attention. Their stunts end up launching Jamie into overhead power lines. Although shocked, he acknowledges that he's okay until he's killed by a passing truck while lying in the street. At his funeral, they meet his twin brother who is an inner thigh masseuse, but he has to get back to Florida.

The episode ends with Peter at his high school reunion where he faces the people that he lied to before. Believing he has perfected his lie, he almost gets away with it, until someone points out a flaw in his historical information.