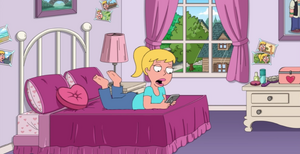 When Stewie struggles to describe the beauty of the microscopic world to Brian, he uses his girlfriend as an example, when pressed on the details of this 'girlfriend', Stewie struggles to name her. Despite Brian's doubts, Girly is shown waiting for Stewie's text as her mother calls for her to come to her piano lesson. As she leaves, she passes a photo of herself and Stewie in an elegant setting.

Retrieved from "https://familyguy.fandom.com/wiki/Girly_Frenson?oldid=207867"
Community content is available under CC-BY-SA unless otherwise noted.