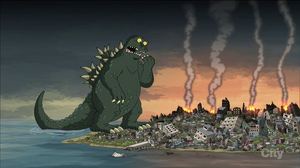 Godzilla (ゴジラ) is a Kaiju or "giant monster", first appearing in Ishirō Honda's 1954 film Godzilla. Since then, Godzilla has gone on to become a worldwide pop culture icon. The monster has appeared in numerous other media incarnations including video games, novels, comic books, and television series.

A monster resembling Godzilla is shown getting blown up by Stewie's rocket after it misfires in "Halloween on Spooner Street".

In "Road to the Multiverse", the opening credits parody various film genres. Brian appears as a Godzilla-like monster and Stewie as every random civilian running in fear.

In "The Peanut Butter Kid", when Stewie decides to go on a rampage to force his way out of acting, he vows to act like Godzilla attacking Haiti. In a cutaway, Godzilla arrives to find Haiti already in shambles, so he slips quietly back into the ocean.

Retrieved from "https://familyguy.fandom.com/wiki/Godzilla?oldid=228669"
Community content is available under CC-BY-SA unless otherwise noted.