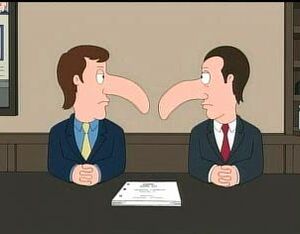 Gordon and Jeremy are two of the CBS executives that review Brian Griffin's screenplay What I Learned on Jefferson Street in Brian Griffin's House of Payne. When Brian repeats an earlier sentiment about Adolf Hitler's success with his book Mein Kampf, Gordon and Jeremy turn their profile to reveal large noses, a Jewish stereotype. After letting Brian squirm for a moment, they reveal they are Italian, an ethnicity that also suffers the large-nosed stereotype.

Retrieved from "https://familyguy.fandom.com/wiki/Gordon_and_Jeremy?oldid=198185"
Community content is available under CC-BY-SA unless otherwise noted.