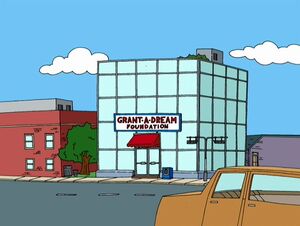 The Grant-A-Dream Foundation is a fictional non-profit organization in the United States that grants wishes to children 2.5 years to 18 years old who have life-threatening medical conditions. Its name is a parody of the Make-A-Wish Foundation. It should be noted that each year, the Make-A-Wish Foundation collaborates with ESPN for a one-week SportsCenter segment called "My Wish", which grants sports-related wishes.

Retrieved from "https://familyguy.fandom.com/wiki/Grant-A-Dream_Foundation?oldid=198119"
Community content is available under CC-BY-SA unless otherwise noted.