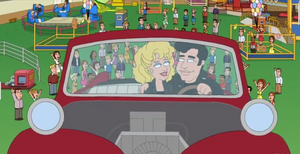 Grease is a 1978 American musical film directed by Randal Kleiser and based on Warren Casey's and Jim Jacobs's musical, of the same name about two lovers in a 1950s high school. The film stars John Travolta, Olivia Newton-John, Stockard Channing, and Jeff Conaway. It was successful both critically and at the box office; its soundtrack album ended 1978 as the second-best selling album of the year in the United States.

"Gotta Give Up the Toad" is a parody of "You're the One that I Want" from the film. New Brian and Lois Griffin sing "Summer Nights" on Karaoke night in "The Man with Two Brians".

Dylan Flannigan, Brian's illegitimate son auditions for the role of Danny in "The Former Life of Brian".

Retrieved from "https://familyguy.fandom.com/wiki/Grease?oldid=215548"
Community content is available under CC-BY-SA unless otherwise noted.