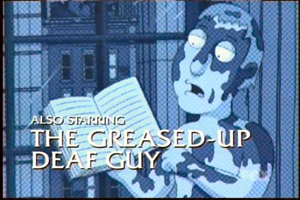 The Greased-Up Deaf Guy is a recurring Family Guy character. He first appeared on the show during the Happy-Go-Lucky Toy Factory company picnic in "The Thin White Line". One of the contests at the picnic, which happens to be Peter Griffin's favorite is to catch the Greased-Up Deaf Guy. He is released from a cage screaming in a high pitched voice, and ran off into the forest. He was voiced by Mike Henry.

He supplied Brian and Stewie with cocaine to frame Jake Tucker for getting Chris in trouble in "North by North Quahog" and claimed he was once a lawyer. He spoke for all of the show when he said it was good to be back on primetime television at the end of the episode.

In "Model Misbehavior", he runs around Goldman's Pharmacy knowing he can't be caught. The owner, Mort Goldman, chases him out with a broom.

In the second segment of Stewie Griffin: The Untold Story, entitled "Bango Was His Name Oh", Stewie Griffin used him so Brian would believe where he got the Three Men and a Baby ghost rumor.

Peter gives him a shoutout on The Price is Right in "New Kidney in Town".

The origin of the Greased-up Deaf Guy is revealed in reverse in "Yug Ylimaf". When he is late for a meeting, he is caught in the explosion of a grease truck which burns off his suit and renders him deaf.

At Family Guy: Live! in Montreal in the Family Guy Volume 6 DVD, The Greased-Up Deaf Guy was named "Jay" after a fan asked a question about his real name. Mike Henry named him Jay after the audience member who asked the question. However, there has been no official recognition in the show and the name is considered unofficial at this time.

Retrieved from "https://familyguy.fandom.com/wiki/Greased-up_Deaf_Guy?oldid=225202"
Community content is available under CC-BY-SA unless otherwise noted.