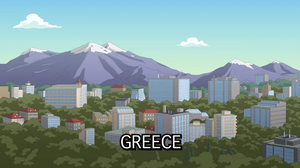 Greece, also known since ancient times as Hellas, is a country in Southern Europe. Athens is the nation's capital and largest city. Modern Greece traces its roots to the civilization of Mycenaean Greece and is considered the cradle of Western civilization.

Peter and the guys travel to Greece in search of God to confront him over the continual losses by the New England Patriots in "3 Acts of God" thinking that they have luck in the once-home of many Gods. There, they meet Chronos, the God of Time and gift-baskets.

Retrieved from "https://familyguy.fandom.com/wiki/Greece?oldid=198051"
Community content is available under CC-BY-SA unless otherwise noted.