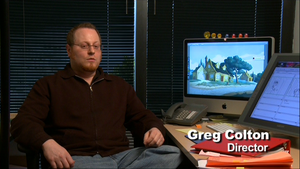 Greg Colton (born October 22, 1976) is an American animation director. Colton is most notably known for directing several episodes of Family Guy and Seth MacFarlane's Cavalcade of Cartoon Comedy. Colton has also served as writer and as a storyboard artist on Invader ZIM, ¡Mucha Lucha! and The Powerpuff Girls. His brother is professional wrestler Colt Cabana, who went by the ring name Scotty Goldman in the WWE.

His credits include assistant director of "North by North Quahog", storyboard of "Emission Impossible" and director of "8 Simple Rules for Buying My Teenage Daughter".

After Dan Povenmire left the show to focus on Disney's Phineas and Ferb, Colton has become the new director for the "Road to..." episodes, beginning with "Road to Germany."

Colton won the 2010 Emmy Award for "Outstanding Individual Achievement in Animation" for storyboarding It’s A Wonderful Day for Pie in “Road to the Multiverse”.

Retrieved from "https://familyguy.fandom.com/wiki/Greg_Colton?oldid=216480"
Community content is available under CC-BY-SA unless otherwise noted.