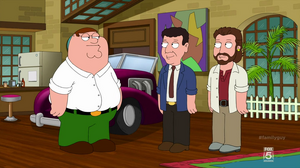 Gregory Ralph "Greg" Evigan (born October 14, 1953) is an American actor known for the television series B. J. and the Bear, My Two Dads, P.S. I Luv U and TekWar.

When Peter starts to think of Evelyn as his second mom in "Mom's the Word", he sets up a cutaway in which he can't tell the difference between Greg and Paul Reiser so he asks if he can just refer to them as "Jewish dad" and "earring dad."

Retrieved from "https://familyguy.fandom.com/wiki/Greg_Evigan?oldid=198052"
Community content is available under CC-BY-SA unless otherwise noted.