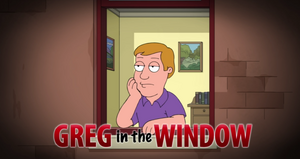 Greg Mitchell is a character in a cutaway gag that complains about Peter not cleaning up the droppings left by his dinosaur in "Pawtucket Pete". As they yell at each other, Peter recognizes that it is only a gag that he is describing to his family and that Greg may not even really exist. Greg retorts that Peter may not really exist in his own world as the scene turns into a plug for Greg in the Window.

At the end of the episode, Greg's wife calls to him to come to bed and quit watching the aftermath of Peter's destruction of Brian's parade balloon. As she notes that he spends more time at the window than with her, he compares the two, referring to her as a real 'pain.'

Retrieved from "https://familyguy.fandom.com/wiki/Greg_Mitchell?oldid=208936"
Community content is available under CC-BY-SA unless otherwise noted.