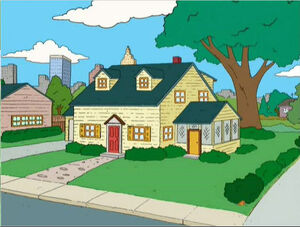 The Griffin Home on 31 Spooner Street in Quahog, Rhode Island is the home of Griffin Family. For many years, the home appeared on no maps of the street or city, and was briefly the only complete house in the nation of Petoria, where it was also the executive office, as seen in "E. Peterbus Unum".

In "Emission Impossible", it was stated that the house was purchased after a lawsuit involving a broken condom that resulted in Chris. And in multiple episodes including "Peter, Peter, Caviar Eater" and "A Fish out of Water", Peter sells or temporarily looses control of the deed to the house. In "Herpe, the Love Sore", Lois warns Peter that they are renting the house. In "Throw It Away", Peter gives a long-winded narration of how Carter and Barbara Pewterschmidt pay for the house, but he mails in the mortgage coupon with a fake check.

The Griffin home is a detached house, primarily colored yellow, with a garage, enclosed porch/sunroom and a backyard.

During an in-episode recording of a DVD commentary by the family in "You Can't Handle the Booth!", Peter claims the actual house is in Burbank, and people keep stealing the mailbox.

In "Death Has a Shadow", a moat was built around the home, but was quickly removed. The basement was home to Ye Old Pube, Peter's bar and restaurant in the original timeline of "Mind Over Murder". "Mr. Saturday Knight" features a downstairs bathroom that is not included in the design of the house, which along with a fireplace seen in "A Very Special Family Guy Freakin' Christmas", was also used originally for one episode during the first run of the show. Dan Palladino jokes in the commentary for "Mr. Saturday Knight" about the downstairs bathroom being a $50,000 addition. On a similar note, the master bedroom was expanded in "No Meals on Wheels" to accommodate Peter's Quonset hut.

The en suite master bathroom also changes position as needed, often appearing to the right of the bed in episodes such as "Nanny Goats", and to the left in "Spies Reminiscent of Us" and in "Connie's Celica". However, not only is the above mentioned Quonset hut to the left, but in other episodes such as "Guy, Robot", Lois is shown to have a dressing table there.

The living room was recreated as a backdrop for a skit on Saturday Night Live in "Don't Make Me Over".

In earlier seasons the carpet in the living room was yellow, it is now a green color.

According to Stewie in "Cat Fight", the pictures of the mountain that hang behind the living room couch are of Mount Quahog.

Retrieved from "https://familyguy.fandom.com/wiki/Griffin_Home?oldid=218212"
Community content is available under CC-BY-SA unless otherwise noted.