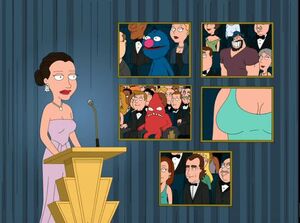 Grover is a Muppet character on the long-running children's television series Sesame Street. His puppeteer and voice are provided by Frank Oz.

In "Model Misbehavior," Stewie Griffin takes a phone call from him on his Sesame Street toy phone. To Stewie's annoyance, he explains that he likes the letter G and the number six. When Stewie tries to end the conversation, Grover apparently becomes upset, and Stewie tells Grover to call back when he calms down.

In "April in Quahog", Grover, along with Daniel Day-Lewis, A Boob, the Red Guy, and Bluto, were all nominated for the Academy Award for Best Actor. However, Grover lost to Red Guy after Peter Griffin stuffed the ballot.

When Carter points out to Peter that he looks like a monster after shooting Cleveland Brown, Jr. in "A Shot in the Dark", Peter interjects that Grover's a monster.

Peter has Meg read a letter of recommendation to Brown University that he wrote from Big Bird in his voice in "Meg Goes to College", during which he questions why you never see Grover and Super Grover at the same time.