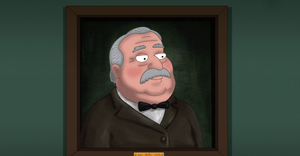 In "Peter's Def Jam", the guys rob a bank, dressed as lesser known presidents. Cleveland dresses as Grover Cleveland, but blows his cover, by telling everyone his real name.

When Peter tells Donald Trump that he'll never be a great president compared to the likes of Franklin Delano Roosevelt or Abraham Lincoln in "Trump Guy", he also points to Cleveland before realizing that he doesn't know who he is. Cleveland reminds him but also points out that he married a girl that he'd raised since age 11, causing Stewie to note that he wouldn't be getting a musical.

Retrieved from "https://familyguy.fandom.com/wiki/Grover_Cleveland?oldid=209829"
Community content is available under CC-BY-SA unless otherwise noted.