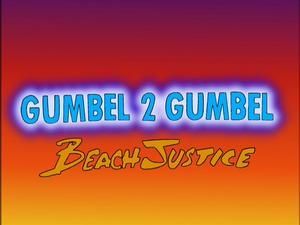 The show was heavily featured in "If I'm Dyin', I'm Lyin'". The Griffins watch an episode where the Gumbels catch a purse thief. When Peter Griffin becomes very upset when the network cancels the show, he has his son Chris Griffin fake a terminal illness so his wish to have the show put back on the air could be granted. The network saw this show as crap. When the show returns to television, Peter had lost sight of why the terminal illness was being faked. Peter was now being treated as a god. After he came to his senses, a new episode of the show has the Gumbels interview a suspect by nodding in a non-committal fashion.

Retrieved from "https://familyguy.fandom.com/wiki/Gumbel_2_Gumbel_Beach_Justice?oldid=198121"
Community content is available under CC-BY-SA unless otherwise noted.