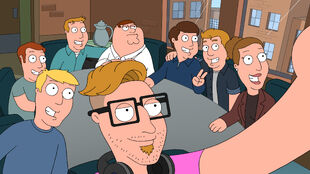 HTTPete
Peter adopts the millennial lifestyle to promote the brewery. 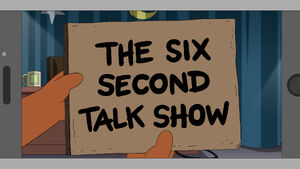 To help promote the brewery to millennials, a millennial hipster is hired to teach the staff. Peter catches on quickly and adopts the millennial lifestyle after walking through a cloud of vape smoke, but when the expert is killed by a bus while texting on a hoverboard, the brewery makes Peter in charge of their program. He enlists the guys to help him create a video program for social media, which after a few misfires, soon attracts the attention of a high-powered Silicon Valley executive. 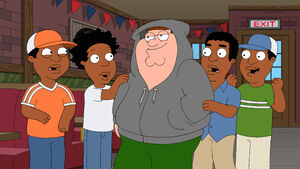 But on a tour of the building where the entire internet is housed, Peter mistakes a server room for a restroom and shorts out the entire internet, leaving the world in chaos. After making their way back home, Peter tries to substitute as the entire internet, complete with pop-up ads, looping videos and viruses. When Meg and Chris both note that they had previous luck in recovering their cell phones with rice, they try it with the server and it works. Dining out at a fancy restaurant, all of the patrons and staff are so engrossed in their smartphones that they fail to notice the restaurant going up in flames around them, as Rod Serling closes out the episode comparing the events around the diners to the FOX Tuesday night lineup.

Retrieved from "https://familyguy.fandom.com/wiki/HTTPete?oldid=204745"
Community content is available under CC-BY-SA unless otherwise noted.