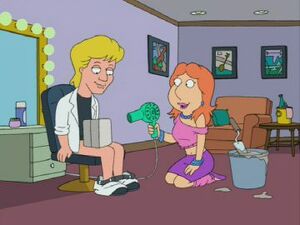 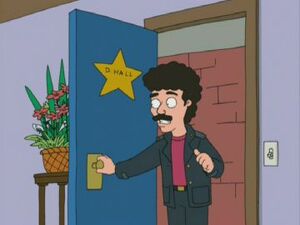 Hall & Oates are a pop music duo made up of Daryl Hall (born October 11, 1946) and John Oates (born April 7, 1949). The duo achieved its greatest fame in the late 1970s and early to mid-1980s. They specialized in a fusion of rock and roll and rhythm and blues styles, which they dubbed "rock and soul."

Lois Griffin is shown making a plaster body-part cast of Daryl Hall in "Brian the Bachelor". John Oates waits his turn but Lois doesn't intend to make a cast of him.

The duo are celebrities onboard a 'Yacht Rock' cruise in "Yacht Rocky". But when the ship capsizes due to a rogue wave, they, and especially John's mustache, become casualties.

Meg visits several shopping malls with pun names in "Christmas is Coming" in search of a Santa Claus that gave her her first orgasm, including "Mall & Oates."

Retrieved from "https://familyguy.fandom.com/wiki/Hall_%26_Oates?oldid=217540"
Community content is available under CC-BY-SA unless otherwise noted.