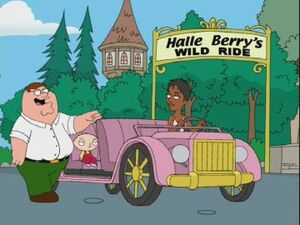 Halle Berry (born August 14, 1966) is an American actress, former fashion model, and beauty queen. Berry received an Emmy, Golden Globe, SAG, and an NAACP Image Award for Introducing Dorothy Dandridge and won an Academy Award for Best Actress and was also nominated for a BAFTA Award in 2001 for her performance in Monster's Ball, becoming the first and, as of 2009, only woman of African American descent to have won the award for Best Actress. She is one of the most highly paid actresses in Hollywood and also a Revlon spokeswoman. She has also been involved in the production side of several of her films.

Berry was involved with traffic collisions in 1997 and 2000. In the latter, she suffered a concussion and left the scene of the accident before the police arrived.

She appears in "The Courtship of Stewie's Father", working at Disney World's ride called "Halle Berry's Wild Ride". On the ride, she runs over several people and then runs away.

Once Peter smokes the crack in "Peter's Two Dads", Brian finds him hugging a pillow and lying on the floor saying the government took away his baby. This is parodying the film Losing Isaiah, where Halle Berry is a drug addict who has her baby taken away.

Retrieved from "https://familyguy.fandom.com/wiki/Halle_Berry?oldid=222868"
Community content is available under CC-BY-SA unless otherwise noted.