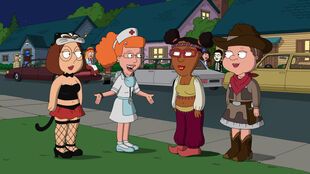 Meg and her friends

Plot: When Chris shows up in blackface to go out Halloween as Bill Cosby, Lois insists he change outfits. When she sees Peter taking several dozen eggs from the refrigerator she finds out that Peter and Joe are teamed up to execute a series of painful and humiliating Halloween pranks on Quagmire. 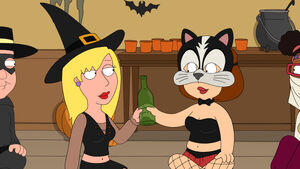 As Meg sets out to attend her first high school Halloween party with high hopes for the evening with her friends, Quagmire tells Peter and Joe that his Grandfather was a kamikaze pilot. The guys talk Joe into letting them ride along with him on an evening patrol.

Later, after Stewie locates Brian and takes him to the boys, Brian goes to talk to them and they spray paint him pink. Brian shocks Stewie by advocating violence in order to extract revenge. At the high school Halloween party, Meg gets chosen to play "spin-the-bottle" and gets to make out in a closet with a boy in an Optimus Prime costume. When they are interrupted by the rest of the party guests, they find that the boy making out with Meg is Chris.

When Joe goes off duty, Quagmire shows them a yard full of stored vintage planes, with a Japanese Zero that was able to fly and Quagmire takes the guys for a ride. Locating the boys that stole his candy, Stewie threatens them with a rocket launcher but is knocked off the roof when one of the boys throws a rock at him, launching his first rocket. 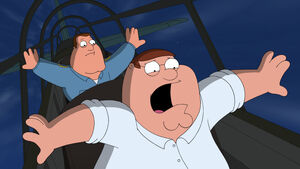 When they are able to stop him from reloading his weapon, Stewie cries for his mom. Lois takes Stewie to the boy's house where she not only recovers Stewie's candy, but threatens the mother by demanding cash as well.

While flying over Quahog in the Zero, Quagmire appears to go into a trance and starts a kamikaze run on a ship in the harbor, scaring the daylights out of Joe and Peter. Quagmire reveals he has ended up pulling the ultimate prank. Stewie shares his candy with Brian. Meg and Chris only admit to hooking up with a fellow high school student at the party.

Retrieved from "https://familyguy.fandom.com/wiki/Halloween_on_Spooner_Street?oldid=214448"
Community content is available under CC-BY-SA unless otherwise noted.