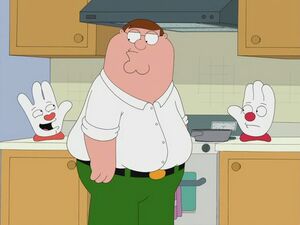 Hamburger Helper is a line of packaged food products primarily consisting of boxed pasta bundled with a packet or packets of powdered sauce/seasonings. The contents of each box are combined with browned hamburger meat, water and milk to create a complete dish. The product line also features products with other starches such as rice or potatoes instead of pasta.

The Hamburger Helper mascot is the "Helping Hand", an anthropomorphic animated, four fingered left-hand glove, which appears in the product's television commercials and on the packages. A left-handed glove is used, making the Helping Hand right-handed. The thumb of the glove serves as the Helping Hand's "hand".