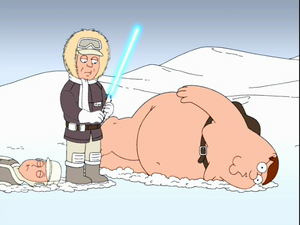 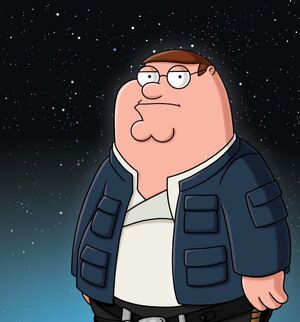 Han Solo, played by Harrison Ford, is a smuggler and "reckless mercenary" in the Star Wars fictional universe. Introduced in Star Wars Episode IV: A New Hope, Solo and his Wookiee first mate, Chewbacca, become involved in the Rebel Alliance against the evil Galactic Empire. Over the course of the Star Wars franchise, Solo becomes a chief figure in the Alliance and succeeding galactic governments. Star Wars creator George Lucas described Solo as "a loner who realizes the importance of being part of a group and helping for the common good."

In "You May Now Kiss the...Uh...Guy Who Receives", Peter saves Luke Skywalker's life by filling in for the Tauntaun that Han cuts open.

Peter, or rather, an ice cream replica of Peter, recreates Han Solo frozen in carbonite by using Smucker's Magic Shell in "Girl, Internetted".

Retrieved from "https://familyguy.fandom.com/wiki/Han_Solo?oldid=224559"
Community content is available under CC-BY-SA unless otherwise noted.