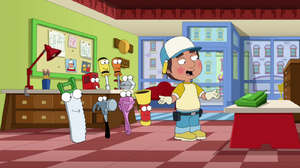 In "Brian & Stewie", Brian reveals he has a gun in case he wants to commit suicide, Stewie responds that he feels the same way when he watches Handy Manny.

When Stewie discovers he has herpes from Brian in "Herpe, the Love Sore", he has to call Handy Manny at the shop, asking him to take the call off of speakerphone so he can explain what has happened.

Manny is voiced by Freddy Rodriguez.

Retrieved from "https://familyguy.fandom.com/wiki/Handy_Manny?oldid=224385"
Community content is available under CC-BY-SA unless otherwise noted.